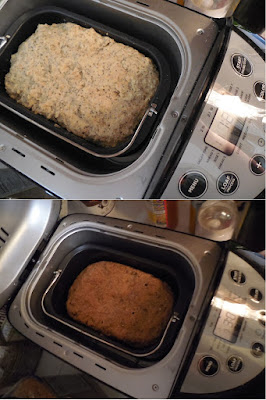 It's been a while since my experiments with a bread machine and I thought it was time to provide you with a completed one-page recipe you can download and print.  While many bread recipes for people with Celiac, or just those who live gluten free, can be tasteless and boring, this one is bursting with flavor.  When you use real food, and whole grains, plus vitamin packed seeds and high quality ingredients, you get delicious results!

As I said at the beginning of this journey, I decided to tame the bread machine first, because not everyone wants to knead, or bake in an oven.  Whether it's mobility limits, old age, or simple lack of time, a bread machine makes quick work of this chore.  However, I found that many details of bread baking in a bread machine were left out or glossed over in books and articles on the subject.  And that there are differences between machines.  This adds a complexity which each person has to contend with alone.

While I tried to cover each complexity during the series of articles, new questions will always arise, leading the baker to innovate, even with such a labor saving machine as a bread machine.  This is doubly true of baking gluten free with a bread machine.  Since you have to also innovate with the flour, and consider such issues as using more water, using oil instead of melted fat, and whether bread yeast works better or ale yeast...  this was truly an adventure.  If you want to read the adventure from the start, you can start here with the first article.

However, those who've already read it, can just use my recipe for their own 2 lb. bread machine.  Directions are given according to professional weights in grams.  To get good results you really have to buy a $10-$20 gram scale such as this one.  (Note, there are NO affiliate links in my blog.)  Gluten free bread baking is too hit or miss without exact measures. This means that even if your bread machine is smaller, you can calculate a smaller loaf, such as a 1 lb loaf by cutting the grams in half without worrying about ruining the recipe.  You can't do that with cups and volume measures.

Another tip I want to give out, is that you shouldn't just replace one of the flours with another one and expect the same results.  I tried to replace the buckwheat with quinoa flour and it didn't come out the same at all.  If you want to replace the flours used, you may have to replace small amounts at first until you know how the flour is different.  Quinoa for example, fluffs up much more than buckwheat.  I'd have to use at least half that amount of quinoa flour or even less!  Use caution if you make changes.

If for whatever reason the link to the downloadable PDF file (above) doesn't work, here it is in picture form: 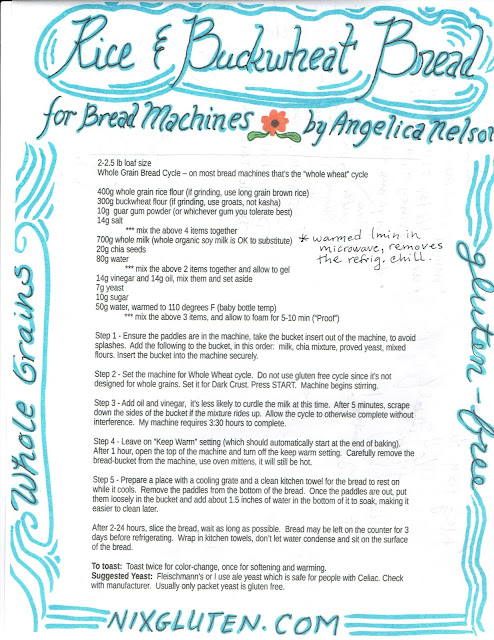 Don't resign yourself to flavorless starch bread, bake your own. 😋

Happy Halloween!  Now that you have the bread, consider making some Goulash to go with it!