By Angelica Nelson - Thursday, January 02, 2020
Happy New Year!  Now how about some easy meals after the big holidays are over?  The best dinners are spontaneous and opportunistic, not to mention easy.

I found some amazing green onions at a local farm market and incorporated several of them into the first dinner, Organic Sausage and Vegetable Stir Fry. The first recipe's veggies are a combination of green peppers, celery, onions, garlic and fresh ginger.  It's topped with seared green onions. The second recipe is for Pork Tenderloin Medallions with Greens (first described in the farmer's market article).

As readers already know, I'm not a fan of processed foods, but I'm also not a very mobile person and there are days when I've been suffering with a migraine headache for days and I just have no energy to defrost something, marinate it and properly cook it.  And my food sensitivities preclude being able to just get takeout whenever I'm stressed.  So I keep a selection of quick meal helpers around, including organic chicken sausage. Most supermarkets carry chicken or turkey sausages that are organic and gluten free.  And quite tasty.  So that's my first skillet dinner recipe: 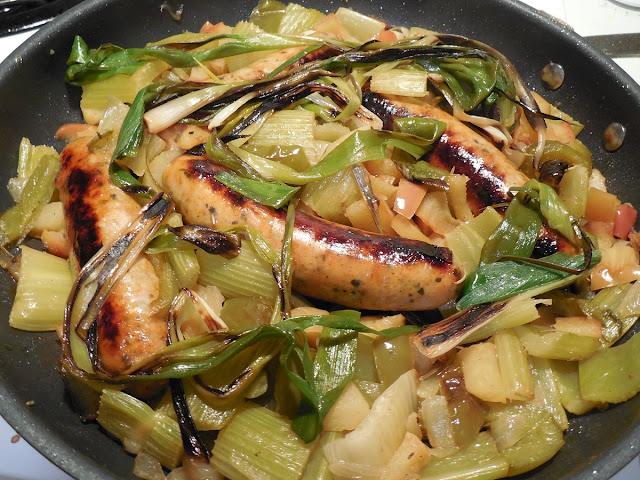 4 Brat Hans Certified GF and Organic Chicken Sausages (many flavors)
* I used Italian Flavor
5-6 green onions, cleaned and slit down the middle
2 cups chopped celery
1 cup or 1 large green bell pepper chopped
1 whole medium onion, or 1 half large onion
1-2 shallots
1 apple, chopped with skin on if it's organic
5-6 garlic cloves, smashed but not minced (if they're too small they burn)
1 inch fresh ginger, chopped
1/2 teaspoon caraway seeds (or cumin or fennel, according to your taste)
Salt and pepper to taste.


Note on chopping ginger:  cut across the grain because ginger has fibers which are unpleasant if they remain long.  If the skin is clean, there's no need to peel it unless you don't like the skin. To peel ginger, scrape it with a dull knife or the edge of a teaspoon. The peels can be used for tea.


1.  Heat a skillet (anything but nonstick which would burn before searing) with a little oil in the bottom, well spread out.  Make sure it's searing hot by dropping a drop of water on it, the water should dance on the surface.  Place the cut green onions, cut side down on the skillet all at once, then press with a spatula until the cut surface is slightly charred.  Remove and reserve for later.

2.  In the skillet, add the oil or fat of your choice (I used reserved bacon fat) and any whole spices like caraway, cumin or fennel. Allow to roast briefly, about 30 seconds on high.

3.  Add the vegetables (and apple) in any order. You can roast the onions and/or green pepper first if you prefer them a bit darker.  Then stir fry them for 3 minutes on medium-high heat.

4.  Open a few spaces for the sausages, and arrange the sausage in the pan, with full contact at the bottom.

5.  Cover and cook for 5-6 minutes at medium heat to steam through and soften the vegetables.

6.  Increase heat to medium-high, remove the cover and stir the vegetables carefully around the sausages. Change the position of the sausages so the cooked side is now on top.  Count to 60 and turn off the heat.  If there's a lot of liquid, allow it to evaporate for another minute.

7.   Garnish with the seared green onions and serve.  Goes great with bread, mustard, horseradish and sauerkraut. Not all at once though! :) 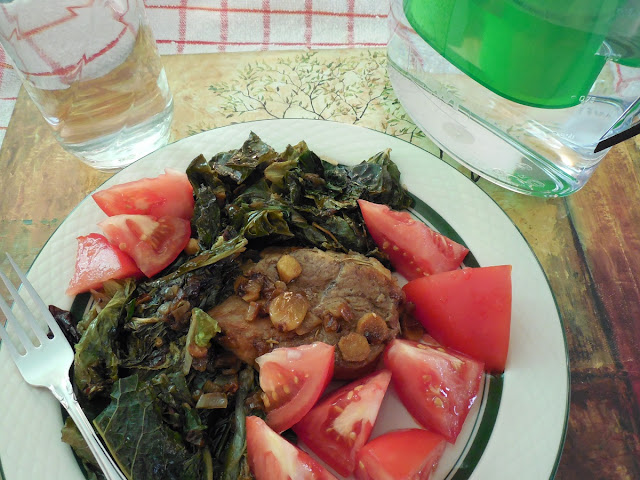 6 cups of greens (6 cups before cooking will cook down to about 2 cups) - make your choice among the thicker larger greens such as Swiss chard or collards, and cut them into 2x2 inch squares before cooking.

NOTE:  To use thicker greens you should know that there is a risk of making the greens too chewy.  If you cook them about 20 minutes, most greens will become chewy, such as kale or collards.  To make them soft again, cook them at least 40 minutes or quick cook them for 10 minutes or less. This recipe cooks them for nearly an hour.  Also, if you buy greens from a farmer, they may need some soaking so any sand falls away.  Soak them for 10 minutes in your largest bowl or several bowls, in enough water to allow the leaves to float, and the sand to fall away.  Then lift them out of the water, leaving the sandy bit behind. Nobody likes to bite into a leafy green and hear a noisy crunch.

In a wok or large frying pan with a lid,

1.  Start by frying the onions in the butter and bacon drippings, at medium heat, add a little salt and pepper, there's no need to darken the onions, just soften them.

2.  Add the greens and cover so they steam and collapse.  They will shrink in size a lot.  Once steamed, about 5 minutes, stir and push to the sides.  Add sliced ginger and smashed garlic and cover for 1 min. Toss with greens, push greens aside again.

Turn the heat up to med-high or high.

3.  Lightly salt the pork medallions, and place directly on the pan, in the center so they sear on one side. Leave a little room so they can do that. If there's too much liquid already, then remove everything from pan and then put pork medallions in. Sear (about 5 min), then flip.

4.  If you had to remove the greens, put them back in, and the liquid, try to keep it to the sides, not on top of the meat.  If there's not enough liquid to come half way up the  sides of the meat, add up to 1 cup of broth or stock.

If you're using canned tomatoes in the winter, slice them in two or three chunks and add them now. Use the tomato liquid in your next batch of spaghetti sauce.


I enjoy these without any bread at all, they're so savory and comforting.  So if you eat them that way, they could be considered Paleo or grain free. May the new year bring us all a lot of luck and good health.