Balance.  Skill.  Daring.  You need these to bake gluten free bread at home.  I won't claim it's "easy" because no bread baking is easy.  Baking gluten free, especially bread, can make you feel like you're doing one of those yoga postures where you're standing on your head, but it's not enough because you need to do it with style too.  But once you get the hang of it, it becomes a joy and a thrill.  Don't get caught in the low expectations trap.  Every texture problem has a solution and nobody should endure dry dense bread that crumbles, or for that matter, powdery cookies (eek!).  I believe this tiger can be tamed also.


She confirmed there is magic in my choices of flax meal and chia seeds (both together), and that too much of it will turn out gummy.  But the problem here is mixing.  See that corner that's all flat?  It's mostly flour that never mixed in.

I won't go into the recipe this time because I already gave it.  It's the same as Experiment 2, except this time I added 1 cup raisins and 1 Tbsp cinnamon to the final rise. I mixed it in partly by hand, but I must've missed a corner. Here's how it looked as it was baking and after.

Every experience is telling me that mixing is the most important step in GF bread baking.


This shows that the best recipe is only as good as the process.  If mixing or proofing is bad, then the best recipe will fail you. Last time I was thinking how light and airy the bread was, and worried that it might be holding too much water.  This time, same recipe, with bad mixing, resulted in a gummy loaf with dry areas.


Although I knew that top part was probably a gas bubble (and I was right), I didn't realize that part of it was not mixed in.


It was hard to wait the full 90 minutes, I had a bad feeling.  An area that didn't mix will lead to yeast just deciding to live somewhere else. A drier area will slow yeast growth and look like a block of wet flour, even when finished.

Suspicion confirmed.  There are areas that look almost normal, but they are wet and tacky.  There's a corner that got almost zero mixing. 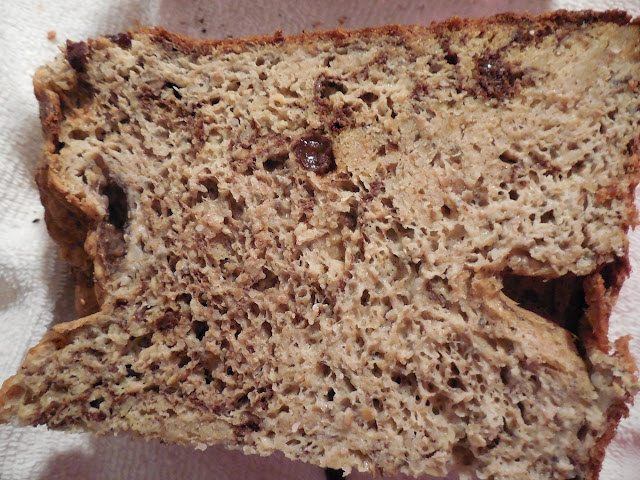 Here's a close up view of the texture/crumb.  The raisins are poorly distributed, there are "lumps" of I don't know what, and it's wet and gooey. 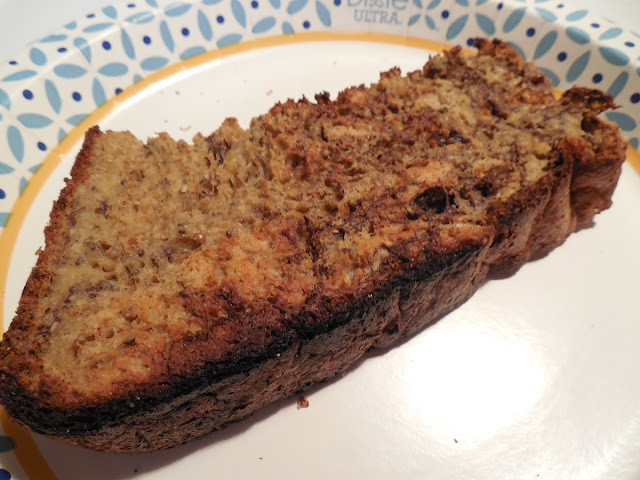 I tried toasting it, only the areas with flour got any toasting done, even after being toasted twice.  The burned edges were the tastiest.  It was very much like biting into a block of polenta.

I would bake it to see if I could save any of it, but the flour being badly distributed causes too much of a challenge. This one is "for the birds."

Here's a video about a woman who found a 30 year old bread machine that still works at a thrift store.  I notice two things in the video, first it has the bottom corners cut off in the "bucket" which would minimize the lack of mixing there, and second, the plain old white bread cycle is 4 hours long.  No wonder the crust is nice and crunchy and he result looks like it was well mixed.  Maybe modern machines are trying to sell a false time savings over quality. For gluten free bakers that's very harmful. We're not trying to entertain ourselves with a bread machine.  It's a need.


Thanks for joining me on this journey of experimenting with a bread machine, where I"m exposing both successes and failures as I learn about how to use it. Please subscribe by email if you don't want to miss any parts, I don't know how many there will be!


Back to the start of this series: Part 1