Well this time I forgot to add the cinnamon and raisins entirely, so this is a nice neutral bread.  It turned out light and fluffy in an almost ethereal way.  Although the color looks multigrain, the flavor and texture says croissant, the soft fluffy inside of a croissant (minus the crunch).  It looks like the air bubbles were pushed toward the center and then up to the top.  This gives an oddly reverse look to the crumb.  Usually you have large openings near the crust, but a more dense center, but this is the opposite. I cut the entire loaf in half so you could see the texture.

This time I used the Dough and then Bake option.  I was going to let the dough rise longer, but the dough looked nearly totally risen at the end of the Dough cycle and I didn't want to lose that puff. I was even afraid that oven spring might bang the bread up against the lid.  But we escaped that fate.


So what's the secret?  Well, I pulled out all the stops this time.  I added plenty of flax, psyllium and chia (all three!) and I let them form their gel before I added them. I included some freshly ground flour, and for flavor you can't beat buckwheat flour.  I used some almond flour, and I followed the advice to use 1 cup of a high-starch flour, preferably a GF bread mix.  Everything else was largely the same.


For lack of a better term, I'm calling this the gluten free sponge method.

Actually the bread started deflating a bit after the picture on the right was taken.  I hadn't opened the machine.  It just seemed to move farther and farther from the window.  Later I cut the loaf in half lengthwise and it showed a large bubble had formed, just under the skin, and then later collapsed.

Gluten free breads shrink more than regular breads after baking.  Not sure why but they do.  Don't even think of cutting a gluten free loaf for at least 90 minutes after baking.  Even that is too short.  Allow 2-3 hours if possible.

The way I can tell if I've waited long enough is that the knife doesn't get very goopy.  I didn't quite wait long enough this time. 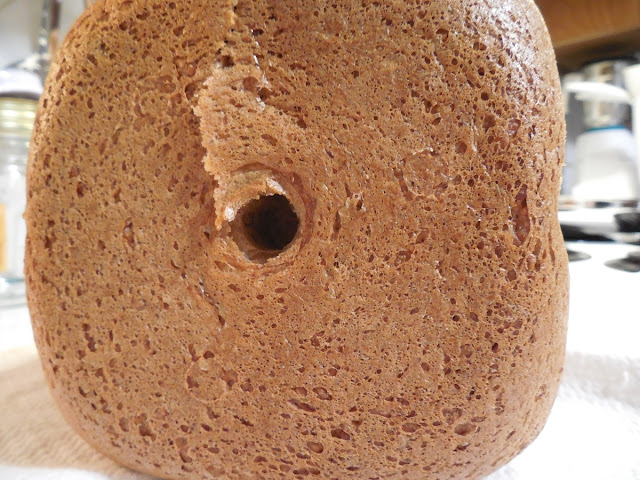 Because the loaf had risen so nicely I didn't take out the paddle. Not much harm done. 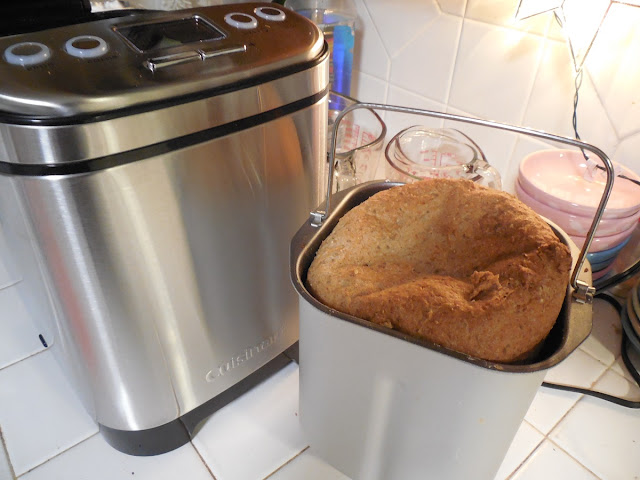 A bit down in the top, but otherwise a nice loaf. That just shows you how high that bubble really went.  If instead of a bubble that was a real rise, that would be fantastic.

The texture of the bread is fascinating.  A mixture of light airy-ness, and moisture.  It's definitely more bready than cakey, because it has quite a bit more spring than expected.  See the next video for a demonstration: 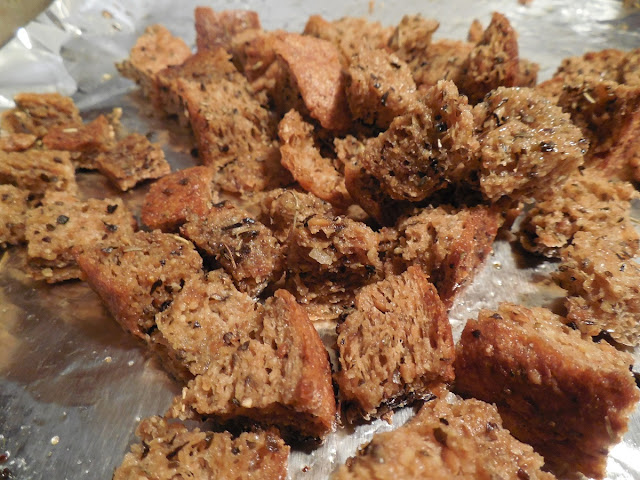 I tried it out for croutons.  It worked fine, but I had to dry them in the oven for 3 hours!  The dough conditioners really pack a wallop in this recipe.

So let's get to the recipe.

Let me preface it by telling those who are new to my blog that I don't have affiliates.  I have a business plan of not being in business with my blog.  This is my diary of my experiences with Celiac disease.  If a product is mentioned it's because I'm using it, not because I have an arrangement with anyone. In general Celiac disease makes people very brand conscious because they find one or two recipes of familiar foods they trust. Then to make their life simple, they stick with that.  I'm no different.

Combine warm water, yeast and sugar and stir.  Allow to become slightly frothy.  This time I didn't let it form a thick "head" because I just wanted it awake.

Prepare the "gluten free sponge" by combining half of the flax seed, the chia seed and psyllium powder with the 1 and 1/2 cups of water and salt.  Stir vigorously until some bubbles are incorporated. Beat 3 eggs into it.

Measure the flours and have ready.

Set machine on Dough Cycle and watch at first to be sure it combines properly.  Help the machine mix if needed.

If remembered, remove the paddle after the second mixing, and before the second rise gets going.

If the dough has risen to the top edge of the pan by the end of the Dough cycle, you may proceed to Baking the dough with the "Bake" cycle.

Allow the bread to stand for at least 1 hour, best is 3 hours.  Then slice and enjoy!

I wrap the bread in cloth for one day, then store what's left in Tupperware in the fridge.

Flavor:  Superb, it smelled even better several hours later.  Only sourdough would be a better flavor than this.  And buckwheat gives such a nice warm flavor.

Uses:  Works equally well with jam, and sausage and mustard.

Keeping:  I'm amazed but this batch didn't stale or stiffen in the refrigerator!  I'll have to make it again to confirm, but it seems that it stales very slowly.  Slice and place in a dry clean tupperware container, refrigerate for a week, or freeze.

Believe it or not, there's still room for improvement in this loaf. It fell because it formed a popover type of top. That's cute in a pastry but not so cute in bread.  Come to think of it I haven't nailed the cinnamon bread recipe yet so hopefully I can do a better batch of it next time. Success or fail, I'll tell all! 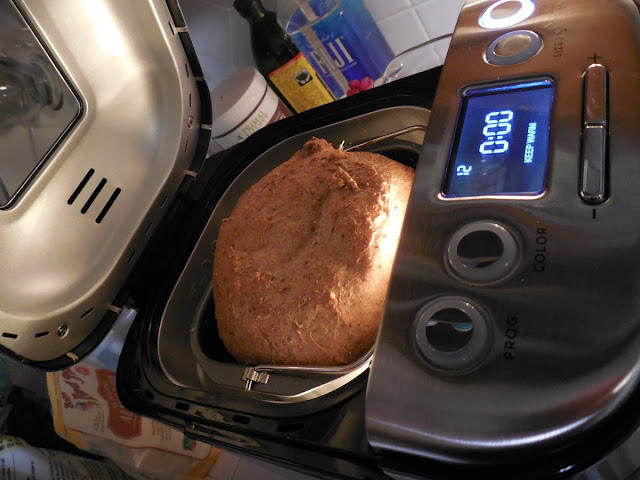 Just like it says, Keep Warm! Until next time, have fun experimenting.

Back to the start of this series: Part 1