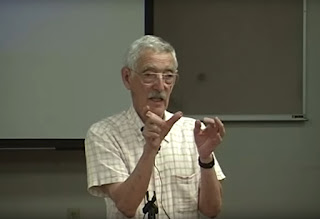 If you haven't heard of him before, then it's my pleasure to introduce you to Dr. Bruce Ames (please take a moment to view his achievements over a lifetime in science) who is and has been a nutrition warrior for 50 years.  He has a distinguished record of publication and still occasionally speaks about health today in his 90s!  Dr. Ames came to my attention when the San Diego Stein Institute for Research on Aging featured his videos on mitochondria and other metabolism subjects.  He speaks with humor and insight and everyone interested in good health should hear him out at least once.

His videos and those of others fell victim to the budget crisis in California and were later moved to Vimeo or Youtube, so now you have to know about him and search for him on the general internet, it's not quite as easy as pointing people to the UC-SD website, which is what I did for a few years after discovering his videos. On the other hand, the momentary loss of his videos was a blessing in disguise because they were reposted in due time.  He is now something of a popular hero on the Internet since people outside the academic world have heard of him.

I don't know him personally and he has a protege (probably several) who can tell you more.  But I'll share what I know, based on what he's said in videos.  He started out as a Toxicologist.  He was trying to trace the path from toxics to cancer.  Over a period of time, he came to the conclusion that it wasn't the toxics so much as it was our vitamin deficiencies that were leading to cancer.  So he started studying vitamin intake over large populations and found that Americans had similar vitamin deficiencies everywhere you looked.  He is part of the reason why women now take folate for healthy pregnancies, and he is part of the debate on how much Vitamin E should be supplemented, just to name a couple of the focuses of his work.


Later, after he had several years of research completed, he and a group of fellow scientists started a lab and began research on a supplement now called Juvenon (alpha lipoic acid + acetyl l-carnitine).  He supplemented his income by selling helpful supplements, and later retired from the company.  Juvenon is now used in various forms not just by the health conscious, but it was recommended to my mother law by her rheumatologist (not by name, but by ingredients) .  There is grudging acceptance of its effectiveness in some corners of medicine.  It has a record of stopping or slowing down the inflammation that comes from an imperfect metabolism, and who doesn't need that today?

Another unusual supplement his company once sold is strontium for strong bones.  Apparently our bones can use metals other than calcium, and besides fluoride.  Strontium has been shown to prevent hip fractures in the elderly. Here is a recent article, though usually they are much much older than this, going back to the 1950s. For some reason it isn't widely used as a supplement today. I'm disappointed to see that since he has retired, the selection of supplements has contracted significantly, and strontium is no longer sold by them. I do still see it on Swanson Vitamins though. So he also sought out new "vitamins" to study (sometime you really should read about the "vitamin" Choline).

He is still developing something called the Chori Bar which is meant to help those with metabolic problems and vitamin imbalances. Over the years I've seen it used in various settings such as hospitals, and the idea was kicked around that it might be publicly sold, then I saw another idea to have it used as a stopgap for world hunger.  Not sure how that story will end, but it will be something interesting to see.

I would even partly credit him with our current best guess about the vitamins/toxics/cancer connection - that is, as toxic loads increase, vitamins are depleted faster and we have an increased need for them today than previously.  I'm not sure I can think of anyone who would cavil much about that statement, and I partly credit Dr. Ames for filling in the details of how harmful vitamin depletion can happen.  If he hadn't done such stellar work, we couldn't have come to this very logical conclusion.  It has the advantage of being a thing we can do something about, by studying and reducing toxic exposure, and by supplementing common deficiencies.


Without further ado, let me get to the videos!  Some of them have sections that seem like repeats until you listen to them closely and realize, he took the same data and went someplace else with it this time. Others really are repeats of some sections of his work.  He digresses though, and the digressions can have more information.  It's my impression that he simply can't fit all that he knows into a one hour talk.

His controversial early video about toxics not causing cancer:


There are of course, many more videos, he has given many speeches before many groups, mostly academic and often a video of the gathering exists. I'm a fan of this well spoken gentleman who has given his life to understanding health and the consequences of toxics, plus given us the tools to protect ourselves - within reason.  There's not much we can do if regulation fails completely. There can always be another  Love Canal. It was tragedies like that which propelled him to study his subject and then be honest about what he found. His videos may be long, but they are very worth watching!

Edit:  Warning!  Some vitamins are designed to include wheat gluten.  An ingredient as simple as beta carotene (Vitamin A) may be stabilized with wheat gluten and xanthan gum and it's unclear if that process would need to be mentioned on the label.  Always check and double check that your vitamins are Gluten Free!

Role of Nutrition in Toxic Injury

Adaptive Dysfunction of Selenoproteins... may increase the risk of the diseases of aging