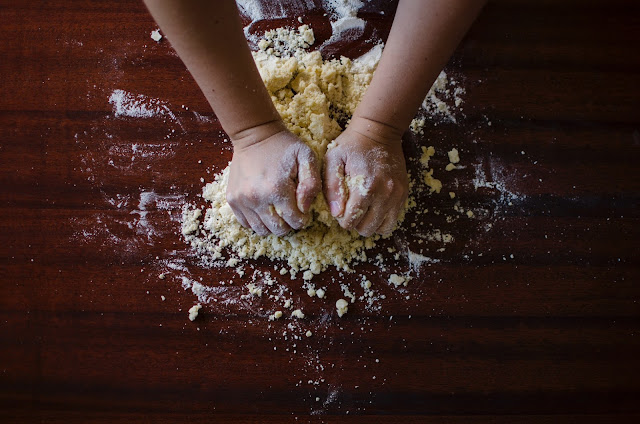 Gluten gets all the glory in baking, but many other components of dough are equally, if not more important in baking.  For this post, I want to remind you that all the words we use to describe pieces of flours, such as gluten, starch, and more technically, mucilage and oligosaccharides... these are all collections of different components in flour, not monolithic single chemicals that we can write down as a formula or draw a picture of.  We could probably make a model of a gliadin molecule found in one variety of wheat and even write out its formula, but it would be different than a secalin molecule found in a variety of rye... yet both are 'gluten.'  Such mysteries we will delve into today.

Because I'm not rich enough to go out and buy every type of flour and test it, nor do I have the stamina for such an undertaking, I'll have to limit my personal comments to flours I've used.  Bu there are others who have been baking gluten free for years and between their descriptions, and my tips, you should find something to get you started on the right path.  Baking has never been an easy thing to do . And many people don't have my memories of growing up in a family where two women baked and two women cooked daily.  From that experience I can tell you that there is an attitude to adopt about daily meal creation whether it's baking or otherwise.

Since this is new to many people who have been suddenly thrust into the role of eating gluten free, let me reassure you.  Nobody does baking right the first time, and everyone makes mistakes, even in the 100th repetition of a recipe.  And it's ok, perfectly ok, to modify recipes because the texture doesn't seem right to you, or you have allergies which must be avoided. My family's attitude toward cooking and baking can best be summarized as:

"A happy home has ready meals, and some treats for everyone."

I grew up in a third culture kid world where restaurants were not part of our lives.  Yet I always had treats and favorite foods and I admired my family for producing them as if by magic.  They made it seem easy because they'd done it many times, and their recipes were the product of oral tradition, memorized by each woman exactly. This isn't a requirement for women, nor are men excluded from cooking or baking.  My husband is a better baker than I am, and has certainly had more practice.  My cousin has converted many recipes to grilling recipes which both amuses him, and keeps the cooking smells out of the house.  Division of labor doesn't have to be about enforced gender roles. And a Celiac or NCGS diagnosis will thrust a person into cooking/baking whether they like it or not.

The way you do anything is the way you do everything, isn't that the saying?  I approach gluten free flours with the same intellectual curiosity as everything else.  Luckily my curiosity is partially satisfied with what has been written already:

A Guide to Working with Gluten Free Flours (2007)  Appreciating the unique qualities of GF flours and experimenting is the focus of this list.

America's Test Kitchen Gluten Free Flour Guide  More focus on recreating classics than appreciating the unique properties of GF flours.  In particular, they often don't allow flours to absorb water before baking and mitigate the dryness by adding xanthan gum. More of a quick fix method in my opinion. But it could also be called a "no fuss" method, so their two, very comprehensive books are still a great resource.

In addition to the above, here is what I've learned so far about gluten free baking and cooking with flours.  This may get technical... repeat after me:  I can do it! 👍

Be brave, consider recipes to be a general approximation/  Suss out which steps have been simplified and you might get a better texture by doing it another way.  Experiment and taste your way out of the cookie cutter lifestyle. Ask why recipes work, not how to do them.  How is the way to a process.  Why is the way to an insight.  You can do it! 👍